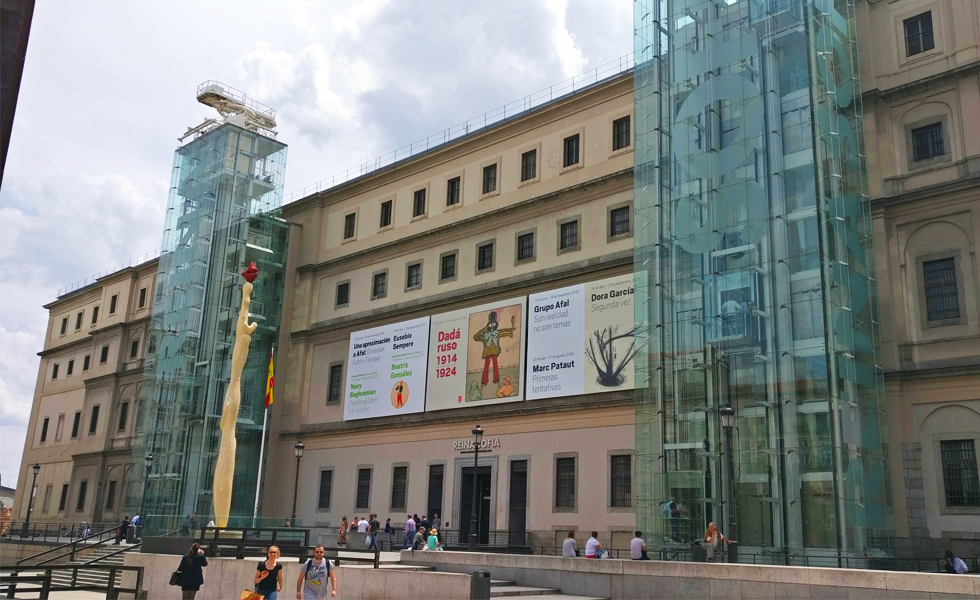 The Reina Sofía National Art Center Museum (MNCARS) is a Spanish art museum of the twentieth century and contemporary, based in Madrid. Its name is usually abbreviated as Museo Reina Sofía.

It took as its headquarters the old General Hospital of Madrid, a large neoclassical building from the 18th century located in the Atocha area, near the homonymous train and metro stations. This hospital was initially designed by José de Hermosilla and later continued by Francesco Sabatini, and is currently known as the Sabatini building in honor of this Italian architect. The museum was inaugurated in 1992. In September 2005, the institution’s facilities were expanded with the opening of the Nouvel building at the start of the Ronda de Atocha.

In one of the vertices of the Paseo del Arte, the Reina Sofía National Art Center Museum brings together works by Dalí, Miró and Juan Gris around Picasso’s Guernica.

View of room 208, when it was dedicated monographically to Juan Gris.
Chronologically, the collection is an extension of the Prado Museum, covering the period from the late nineteenth century to the present. Royal Decree 410/1995, of 17 March, rethought the state collections, marking the birth year of Picasso (1881) as the dividing line between the Prado and Reina Sofia, a criterion that has been questioned as too rigid and that being diluted by the latest initiatives of this museum, such as the incorporation of examples from Goya and Sorolla.

The Costume Museum presents a look at traditional clothing