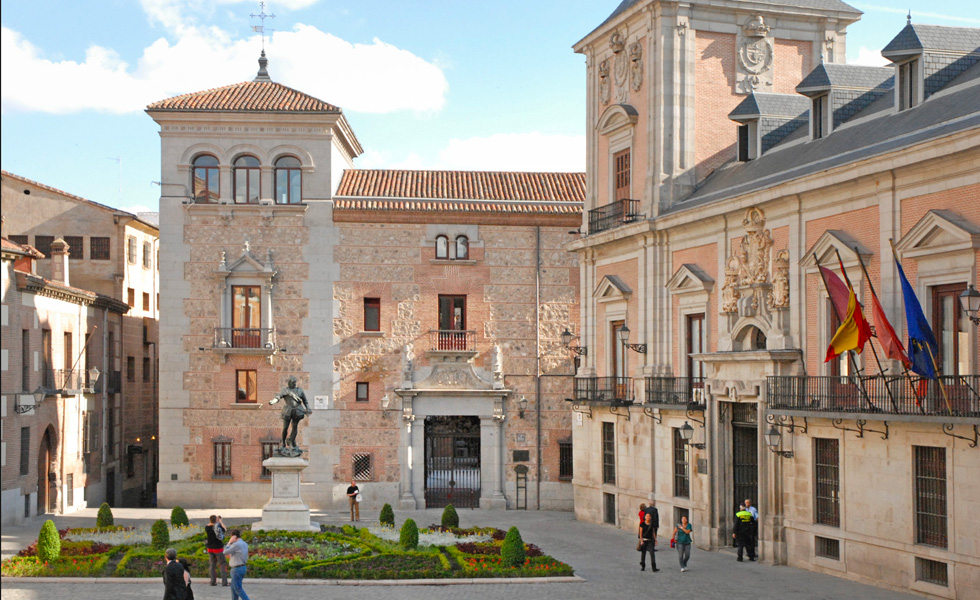 Madrid is ideal for taking a walk. We’ve prepared a route for you that you can easily follow on foot, map in hand, where you will discover the Madrid of the Austrias.

Route 1 – The Madrid of the Austrias
Duration time: 2hs approx.

Madrid de los Austrias, also called the Austrias district, is known a large area of the Spanish capital, without administrative entity, corresponding to the primitive medieval layout of the city and the urban expansion initiated by the monarchs of the House of Austria, from of the reigns of Carlos I and, especially, of Felipe II, who, in the year 1561, established the Court in Madrid.

For tourist purposes, the name is used to promote the monumental groups of a large part of the administrative districts of Sol y Palacio, which represents approximately a quarter of the aforementioned area.

In the first half of the sixteenth century, before its designation as capital, Madrid was a medium-sized town among the Castilian cities, with some social relevance and political influence. It had between 10,000 and 20,000 inhabitants and was part of the group of eighteen cities that enjoyed the privilege of having a voice and vote in the Cortes of Castile.

He had welcomed the Cortes of the Kingdom on numerous occasions and, since the time of the Trastámara, was frequented by the monarchy, attracted by its hunting wealth. In addition, one of its religious temples, San Jerónimo el Real, was chosen by the monarchy as the official setting for the act of swearing by the princes of Asturias as heirs of the Crown.The first to do so was Felipe II (April 18, 1528 ), which 33 years later would set the Court in Madrid, and the last Isabel II (June 20, 1883).

Look for the ‘Kilometre 0’ plaque on the ground then take a photo with the Bear and Tree Strawberry monument and the statue of Charles III. The clock at Casa de Correos always rings in the New Year.

The most famous churros, strips of fried dough, in Madrid are served up in the San Ginés chocolate bar, right next to the church of the same name. Close by is the Descalzas Reales Monastery (16th century).

3Monastery of the Incarnation

This royal building houses significant collections of 17th and 18th-century painting and sculpture, including works by Carducho, Lucas Jordán and Pedro de Mena.

On one side is the Teatro Real opera house. On the other you will find the Royal Palace and its gardens. The Solemn Changing of the Guard takes place the first Wednesday of every month at 12 noon (except during the summer and when there are official events).

The cathedral boasts its own museum allowing access to the dome with its splendid views over Madrid as far as the mountains.

This street lies on one of the ravines which served as a natural defence for the Muslim citadel of Mayrit. Look out for the remains of the old Arab wall.

Stretching from San Miguel Market, a favourite of gourmets, this historical street is lined with traditional taverns. The Arco de Cuchilleros archway leads into Plaza Mayor.

In 1617 Juan Gómez de Mora undertook the regularisation of the medieval square. It was later reformed by Juan de Villanueva in 1790. The equestrian statue of Philip III and the Casa de la Panadería are its two symbols.

In 1629 Philip IV commissioned the construction of the Santa Cruz Palace for housing the prison annexes.

The most important ‘gamer’ event in Spain arrives in Madrid

Things to Do in Madrid