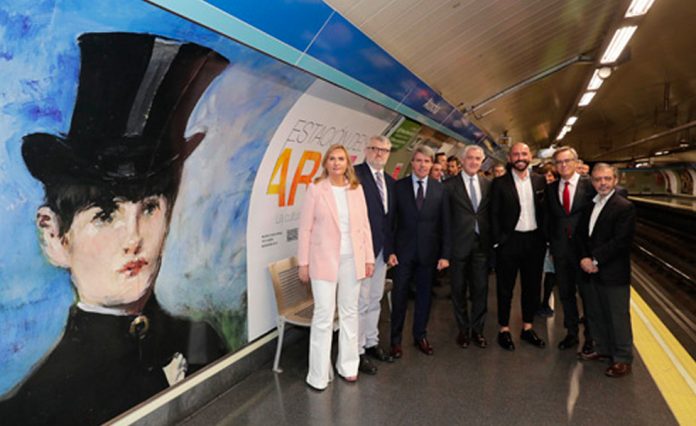 If you pass every day through the Atocha station on the way to work or when you are going to take a drink downtown, from now on the journey will be made more enjoyable thanks to the initiative of the Community of Madrid to convert this stop into the Estación del Madrid. Art.

The Atocha subway station of Madrid is, from today, the Art Station thanks to the collaboration of the Community with these great museums, embodied in an agreement with an initial term of two years, extendable for two more. Under this agreement, this emblematic station of the capital will show in its corridors, platforms and lobbies 36 reproductions at scale of the main works exhibited in the three museums (12 of each).

Among those belonging to the Prado Museum will be the Garden of Delights, by Bosch; the Surrender of Breda, by Velázquez; or the Prairie of San Isidro, of Goya. Reina Sofía are, among others, Picasso’s Guernica; the Open Window, by Juan Gris; or Casa de la Palmera, by Miró. And from Thyssen there will be Los Descargadores, by Van Gogh; the Hotel Room, by Edward Hooper; o Santa Catalina de Alejandría, by Caravaggio.

They will be vinyl of greater proportions than the original works, with which the station is transformed into a museum with large-scale works, where users can learn and enjoy the smallest details of the works of some of the best artists in history .

Garrido, who has been accompanied by the counselors of Transport, Housing and Infrastructure, Rosalía Gonzalo, and Culture, Tourism and Sports, Jaime de los Santos; he explained that “culture today, once again, gains space within that other Madrid that runs through the bowels of the city and the region, but that is also Madrid”.

As highlighted, Metro de Madrid is used every day by more than 2.3 million people and these three museums constitute one of the most important cultural hubs in the world, with more than 7.5 million annual visitors.

The regional president has quoted Miguel de Unamuno as saying that “only the one who knows is free, and the freest the one who knows the most … Only the culture gives freedom”, and has assured that “for that reason, we want to facilitate all young people from Madrid access to the best of our culture. “” In Madrid, culture travels by Metro and with this Station of Art, “he underlined,” we want to make known this open, dynamic and attractive Madrid, which is also a cultured Madrid, who falls in love for his art. “

The Bodyguard – The Musical arrives in Madrid